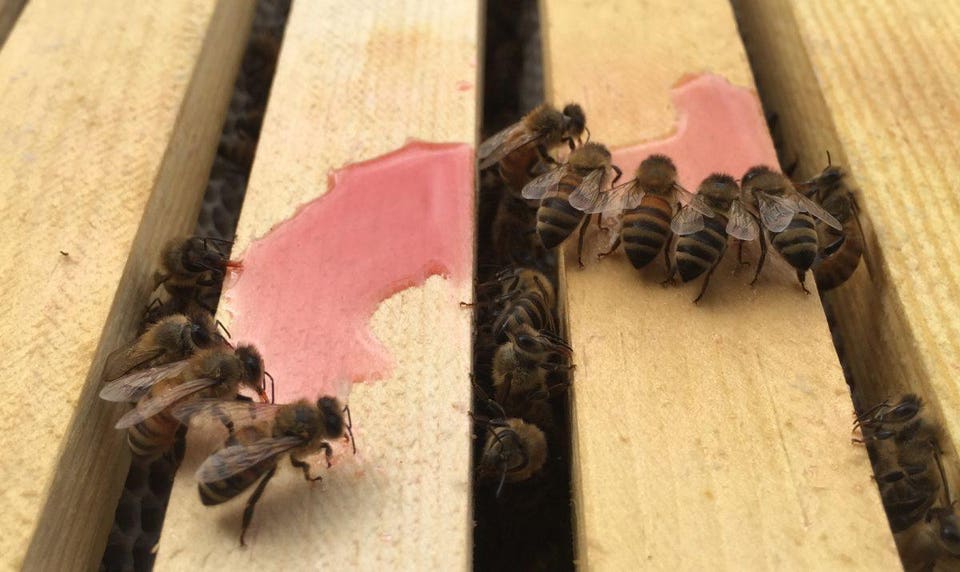 Innovative Israeli cannabis technology company PhytoPharma International is causing a buzz! The artisanal honey producing company’s bees are feasting on a spectrum that contains cannabinoids. Since bees are insects that do not have a mammalian endocannabinoid system, they are not getting high. However, they pass these nutrients directly through their natural honey making process and –voila– they create Pure Bee cannabis honey.

The company discovered an IP protected method that allows bees to naturally express THC and CBD in their honey in a highly efficient manner, utilizing low amounts of cannabinoids to achieve high performance. This honey is not a cannabis-infused product. Instead, Pure Bee is an entirely natural product, combining the beloved texture and taste of honey with the healing properties of cannabis.  The bees are converting the full spectrum of the plant into the honey. Pure Bee is a highly bioavailable cannabis-derived honey containing up to 1,000 times lower measurable concentration of cannabinoids, compared to conventional treatment methods, well under 0.3%.

The honey effectively serves as a platform which can “host” different strains of cannabis with varying ratios and concentrations, and can offer them to a broad patient population in a highly-bioavailable way, in a much safer method than vaping or smoking.

Ilan Ben Simon invented Pure Bee. His career was initially halted due to arthritis when he began using medical marijuana. During this time, he became highly knowledgeable on the plant’s medicinal properties, products, and the overall market.

Following this research, Ben Simon invented the medical cannabis, honey, using analyses by Prof. Dedi Meiri, head of the Cancer and Cannabinoid Research Lab at the Technion, the Israeli Technology Institute. Both gentlemen aimed to uncover its full potential and properties.

“The pertinent thing that I feel is special about our product is that we are enhancing nature, by nature,” says Avner Ben Aharon, CEO of Phytopharma International, in an exclusive disclosure to Forbes.com. “Although other people were trying to create natural honey with cannabis, only my inventor Ilan found a way to achieve it.”

Phytopharma claims to implement the most advanced biotechnology to enhance natural products and processes delicately.

“We combined the healing powers of cannabis with the amazing delivery capability of honey. We aim to continue to apply our unique brand of ‘nature-tech’ to cannabis medicine, food, and beverages, veterinary and cosmetic products,” says Ben Aharon.

“There may be two optional mechanisms that can explain the honey’s high-efficacy,” Ben Aharon continues.  “The honey serves as a high-efficient vector to cross the Blood-Brain-Barrier. While producing the honey, cannabinoids are transformed in the bees’ stomachs into superiorly efficient molecules.”

Phytopharma filed a US provisional application on August 2015, and on July 2016 a PCT was submitted (published January 2017) which covers their delivery platform from start to finish – bee feeding composition, feeding process, and final product. They entered the national phase in January 2018 in numerous countries, including the United States and Canada.

The uniquely reddish fuchsia honey is characterized by its rapid onset –five to 10 minutes– compared to other edible products, which can take anywhere from 30 to 90 minutes to take effect.  Therefore, the honey is more appropriate for patient populations that require quick activation, such as those with chronic pain. Secondly, it contains up to 100 times the efficacy. Two grams of the honey, which contain 50 ppm (0.1mg), were reported to alleviate pain for fibromyalgia patients significantly.

The product is packaged in pre-measured-dosage cooking syringes, containing units of six or three cc, as well as in a single shot of one cc. The non-intoxicating CBD Honey has a concentration of 0.5 mg per gram, while the psychoactive THC Honey contains a level of 0.7 mg per gram. A consumer can squirt the honey (via the syringe) under the tongue or into a teacup.

Citing a significant cause for concern, Declining Bee Populations Cause a Threat to Global Agriculture states, “The danger that the decline of bees and other pollinators represents to the world’s food supply was highlighted (when the European Commission decided to ban a class of pesticides suspected of playing a role) in ‘Colony Collapse Disorder.’ One of every three bites of food eaten worldwide depends on pollinators, especially bees, for a successful harvest.”

As for potential implications on the general bee population in connection with the cannabis honey production, PhytoPharma sees a positive impact. They claim that the superior nutrition provided in their bees’ proprietary feeding composition –as opposed to sugar syrup utilized in the honey making industry– lead to a successful proliferation of the bee population in the project. In the future, their model may be emulated in other hives.

Additionally in the pipeline, Phytopharma will use the concept of their product as a basis for various forthcoming edible cannabis products. They also plan on combining other therapeutic, essential ingredients with cannabinoids, for improving the spectrum of activity in the product. Developing products for specific disorders in collaboration with pharmaceutical companies is currently underway in their research and development department.

“In the future, if companies will prove that specific cannabis strains can cure or treat specific illnesses, then we can make honey from those specific strains, specifically to treat the correlating illness,” Ben Aharon says, hopefully.

Meanwhile, the company completed its first production season in California, and their honey will soon be available initially in California’s dispensaries. A fast-acting, naturally-derived edible that supports patients’ health, as well as the bee population, is clearly something to buzz about.